UNITED KINGDOM: The Impact of Brexit on Sponsor Licence Applications


This white paper was prepared by Newland Chase. View as a downloadable PDF

The Home Office’s latest publication of sponsorship transparency data up to and including Q4 2021 confirms what immigration practitioners predicted and are now witnessing: that Brexit, supercharged by a post-pandemic recovery of the UK economy, has resulted in a surge in UK organisations applying for sponsor licences (to hire foreign workers) which, in turn, has drastically impacted processing times and lead to a rapidly growing register of sponsors. 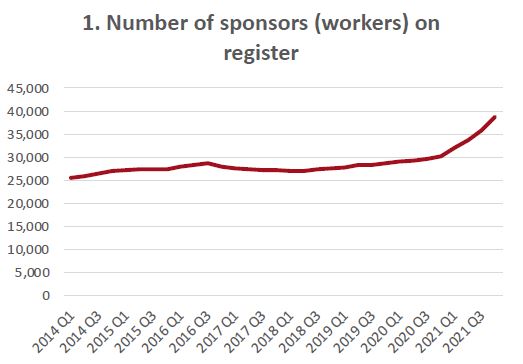 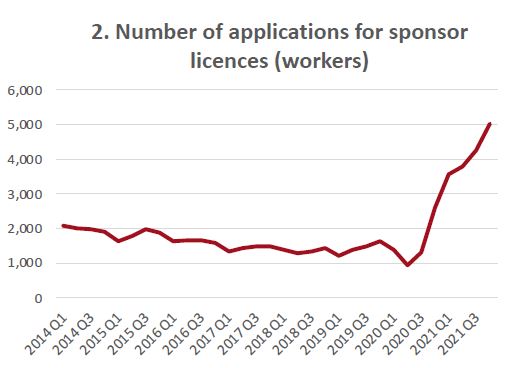 *Chart 2, which comes complete with a dramatic uptick for the Q4 2020 to Q4 2021 period, indicates over a four-fold increase in the number of sponsor licence applications being made, and serves to explain the data in the following charts. 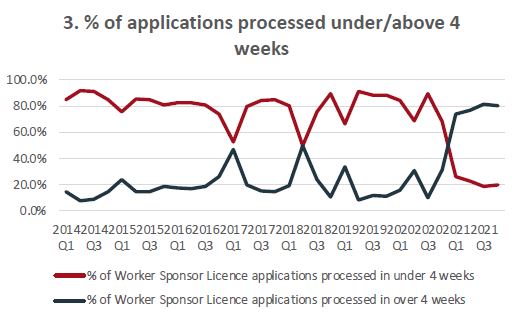 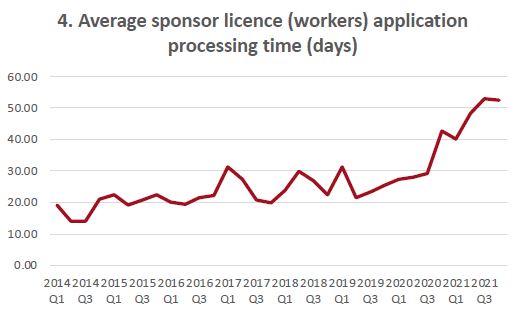 On closer inspection, this lengthening is visible even prior to Brexit; organisations planning for the UK’s departure from the EU were pre-emptively securing sponsor licences and, thus, beginning to place strain on the Home Office’s ability to process applications in line with processing times seen prior to 2019. 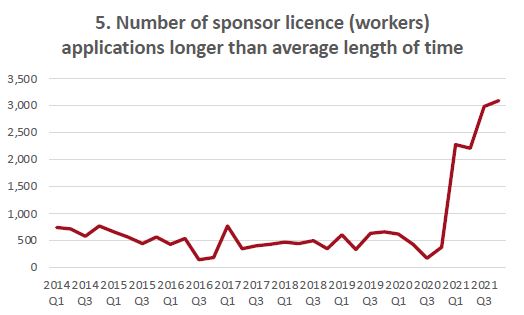 Of all the upticks seen in the charts above, *Chart 5 stands out in terms of visualising the impact of Brexit on the Home Office’s ability to process applications. This chart shows that, for the period of Q4 2020 to Q4 2021, there was an almost six-fold increase in the number of sponsor licence applications taking longer than the average processing time shown in Chart 4.

It is reasonable to conclude that the spike in the number of applications for the same quarter, shown in Chart 2, is the probable cause of this, indicating the Home Office’s struggle to adequately resource for processing applications.

What Does This Mean for Organisations Looking to Become Sponsors?

The above data underscores the need for all organisations seeking to apply for a sponsor licence to consider the following:

How Newland Chase Can Help

A sponsor licence provides the foundation for an even greater number of sponsored workers, and it’s vital that employers work to put safeguards in place and look to capitalise on this facility to the fullest extent.

Newland Chase has an unrivalled understanding of the sponsor licence process. We offer a full range of services including full system audits and recommendations tailored to your business. Contact our team for expert assistance in navigating the complexities of compliance, reviewing and refreshing the licence and unlocking all of its potential to create opportunity going forward.

*Charts based on sponsorship transparency data published by the Home Office

This immigration update is for informational purposes only and is not a substitute for legal or scenario-specific advice. Furthermore, it is important to note that immigration announcements are subject to sudden and unexpected changes. Readers are encouraged to reach out to Newland Chase for any case- or company-specific assessments.